Trend When To Use A Certain Emoji And Their Meaning

It would be interesting to look into the history of what has essentially become a part of everybody’s language in today’s digital world. Let’s face it, they are used within practically every social media platform. Let’s take a look at the meanings of the iconic faces we use to express ourselves.

They can be as simple as a little smiley face indicating an emotion one feels when they receive a positive message. They can be as complex as having a harmless upside-down face representing that you are not okay.

Smiling faces and eyes are emojis that are commonly used. They indicate happiness or something positive. Other smiley faces may be used in the same way, but they are mostly used when expressing great levels of joy.

A message with these emojis will generally be exceedingly positive. It is never used with insults or criticism. It conveys a range of positive, friendly, and happy sentiments. It may be used as passive-aggressive or sarcastic when saying “I am fine” even if it’s really not.

Face With Tears of Joy

This emoji is used to show laughter. It is a face with a big grin and smiling eyes that are shedding tears from laughing really hard. It is closely related to LOL (laughing out loud). If someone sent you a funny joke, you could respond with this emoji. It represents someone laughing really hard that tears are coming out of their eyes.

It can be used to show amusement when someone does something embarrassing or funny. It is not to be confused with rolling on the floor laughing emoji, which shows more intense laughter.

The fire emoji is literally fire, which is mostly yellow with red on the top. It is to signify that something is awesome, exciting, or basically, on fire or “lit.” It can also be used literally when something is catching fire or can be used metaphorically.

It is a yellow face with eyes that are smiling, and a closed smile with its tongue out in one corner. As if it is licking its lips with contentment. This emoji can be used in anticipating a delicious meal. It is used to convey that the food you ate was delicious, or it was to drool for.

Smiling faces with horns more often accompany minor mischiefs or messages that convey something naughty while the frowning devil face implies something more malicious. It may also mean devilish or naughty behavior.

There are four kissing face emojis that all depict something romantic or fondness. It can be used when you want to send a kiss virtually to someone. The kissing face emoji with a small heart may be more romantic, while the others can convey innocent whistling. 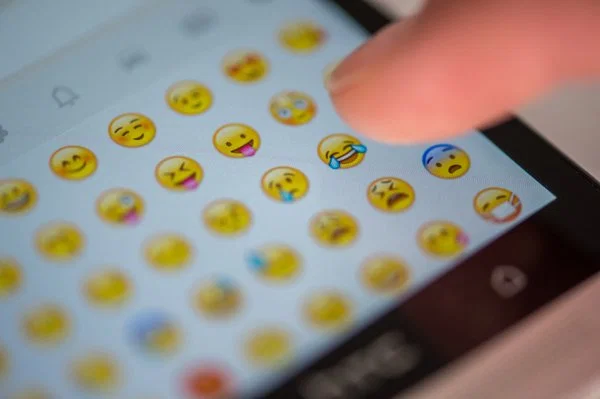 The unamused face is used to convey dissatisfaction or suspicion. It is shown with a raised eyebrow, a frowning mouth, and eyes looking to one side. This emoji does not show anger or sadness, but rather a very subtle negative emotion. It can also convey that someone is not impressed. An example would be when someone tells you that they will meet with you, and decided not to come to the agreed place. You can then send this emoji to that friend.

Using a certain emoji can mean quite a few things to the receiver of the message. It’s really hard to decipher what the meaning of the emoji is as it does not tell the real feelings of the person. Emojis have gone from a region-specific trend in Japan to conquering the whole world and becoming ingrained in our culture for better or for worse.

There is even a World Emoji Day, which is celebrated on July 17 annually. It was set during this day because there is a certain emoji in Apple that depicts a calendar with the date July 17 on it.

Heating And Cooling Made Better Than Ever Before
January 22, 2022 globallearning

Fix It Yourself With These Home Improvement Tips
January 14, 2022 globallearning

Don’t Know Anything About Laptops? Read These Tips!
January 11, 2022 globallearning